Leisure and Events in Mallorca

A Jaime Anglada concert of equal strength and delivers on stage. Following his tour of Spain fell for their homeland Palma de Mallorca, where love and admire him wherever he goes. Making a waste of talent as he usually was able to put up the public, a very dedicated public in Ses Voltes, where they chanted every one of his songs. 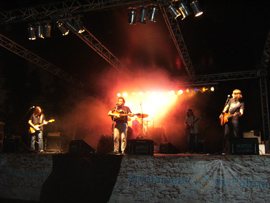 Jaime Anglada received us in his dressing room where we could make a hilarious interview and to check the great person he is and to know your group of excellent musicians. When the concert ended with the feeling we were able to spend hours listening to his music. Jaime Anglada, a great artist who have had the pleasure of knowing, and if on a stage wins over the people, we can confirm that privacy is a great person.

Sheila: How long have you been in the music world?

J. Anglada: We are still working professionally about 17 years, from 93.

Sheila: That since you recorded your first album?

J. Anglada: No, I started singing my songs in a circuit of bars throughout Palma, we miss everyone and who was also a very nice circuit both public and bars, starting with Sa Finestra, DC3, Bluesville…etc, and played every day and the truth is that I remember fondly, was a good start. 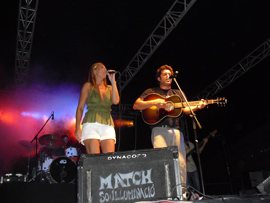 heila: I have understood that at age 8 and started playing the saxophone and then follow the guitar and began to compose your own songs. 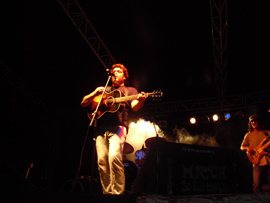 Sheila: How many records you have published?

J. Anglada: I have 5 disks in the study.

Sheila: A song of them all?

Sheila: Are you inspired by any artist to guide your music career?

J. Anglada: The truth is that yes, my icons as Bruce Springsteen were in principle and refers to Dylan, which to me is my guru. And groups at the time he was 16 years, groups like U2, the 80 groups or as Brian Adams, I grew up in the 80’s and these groups marked me as a teenager. Today I always say that when I see Bob Dylan I want to write songs, when I see Springsteen I want to get on a stage, but when I hear the song “Mediterráneo” I say “I am and how I feel”, I really am closer than Serrat sings that I like but what I really like is rock & roll. 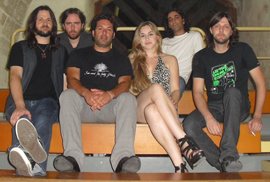 Sheila: Members of the group now?

Sheila: The beginnings are hard especially in the music world, what you do before you succeed?

J. Anglada: Well, I’m getting harder now and looking nicer and more controllable the beginning, the truth is that when I was 16 I said to my father that I wanted to play guitar and surf, and my father looked at me and said…oh Jaumet…but today I do and I really do not feel have got a dream, see, because I don’t want feel that I’ve got because if I do I will have already played, then I think I’m living the way I wanted to live, but I’ve worked as a sailor, making varnishes, sailing, ships carrying to the peninsula, and that was my job. 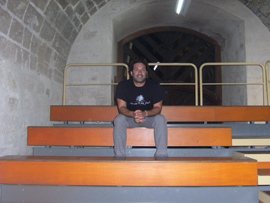 Sheila: Is there anything in the world which would leave the music?

J. Anglada: Three years ago you would not know this but today I say that for my children.

Sheila: What do you feel when you’re onstage?

J. Anglada: I am the happiest guy on the planet, besides playing with these musicians I feel very lucky because I have a great time with them and now I go to play with confidence and peace of mind knowing what I do, forgetting emulate those artists who emulated in my room when I was 16, today I feel a little more and sometimes when I’m singing I feel very wrapped because they help me to it.

Sheila: What is the most surprising thing that have said to you in a performance? And what have released to you?

J. Anglada: I have not been so lucky, to tell you the truth I always hear everything that say to me in the proceedings but right now I do not know to tell you, I’m too focused on the songs we’re singing or control a little to guitar so I can not deconcentrated that.

Sheila: Do you ever reached a thong in the face?

J. Anglada: I love that to pass.

Sheila: What do you like playing more guitar or a woman’s body?

Sheila: Do you sing in the shower?

J. Anglada: Well look, a little cheese, a little wine and good friends or your partner I don’t know.

Sheila: You’d take a drink with me tonight?

J. Anglada: And three! and then teach you to play the guitar. 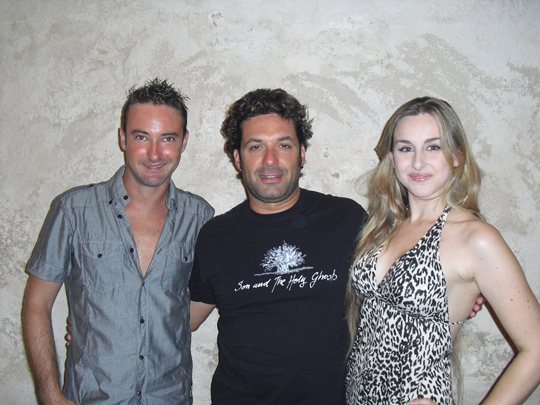