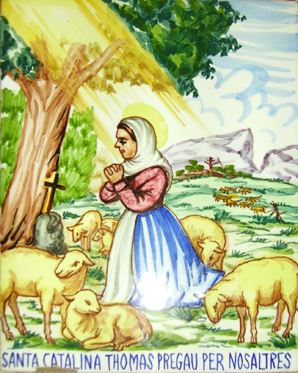 Santa Catalina Tomás has had a prominent place in the moral teachings of the children and particularly the girls of the island.

She was born, and lived in Valldemossa, but annual homage is paid to her in Palma and in Santa Margalida as well, The fiestas held in her honor were known until recently as Sa Beateta, or Sor Tomaseta, and are now referred to in Mallorca as Processió de la Beata or Procession of the Blessed.

Santa Catalina Thomás, the only Majorcan saint, is a very beloved image on the island. For this reason, many patron saint festivals are held in honor of her. Among them, the town in which the Blessed was born stands out.