The story of his birth As legend tells, a child was born of the unfortunate marriage, as the court had planned to pass the King’s wife off as his lover. At the break of dawn, after he had maintained fleshly relations with his own wife without knowing it, he found out the swindle, abandoned the palace and never came back. His mother chose his name by lightning twelve candles with the names of the Apostles and decided that I should be christened by the name of that which lasted longest. It turned out to be Santiago, another name for Jaume. Jaime himself is narrating in his Book of Deeds (El libre dels feyts) the circumstances of his siring: “Now I will relate in what way I was begotten, and how my birth was. Firstly, in what manner I was begotten. Our father, King Pedro, would not see our mother, the Queen, and it chanced that once the King, our father, was in Lates, and the Queen, our mother, in Miravals: and a nobleman, by name En Guillen Dalcalá, came to the King, and besought him till he made him go to Miravals, where the Queen, my mother, was. And that night that both were together at Miravals, it was the will of our Lord that my birth should be in the house of the Tornomira, the eve of Our Lady Saint Mary, Candlemas day. And my mother, as soon as I was born, sent me to Saint Mary’s; they carried me in their arms; matins were being said in Our Lady’s church, 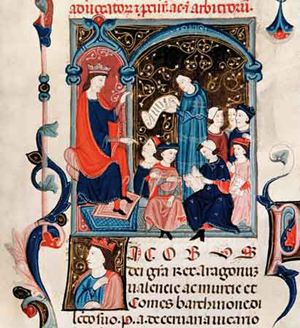 and as they took me through the porch they sang Te Deum Laudamus. The clergy did not notice the arrival of those who carried me, as when they entered they were singing that canticle. And then I was taken to Saint Fermin, and when those who carried me entered the church the priests were singing Benedictus Dominus Deus Israel. And when they took me back to my mother’s house, she was very glad because of those prognostics that had happened.”