Everything began a long time ago, on December 7th 1234, when James I of Aragon empowered Guillem of Montgrí, the then elected archbishop of Tarragona, to conquest Ibiza (Medina Yebisah) and Formentera. 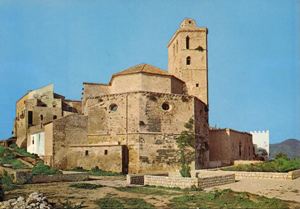 The King wanted to take over the islands, which were then occupied by the Saracens, as feudal land. As the historian Joan Marí Cardona tells in his book ‘La conquista catalana de 1235’, James I signed the agreement on the cession of feuds on the aforementioned date, “merely reserving the sovereignty, with the right to make war and peace”. He set a term for the conquest from the date the donation was to be signed until the next festivities of Saint Michael, which were to be held on September 29th of the following year 1235.

Guillem of Montgrí disposed of nine months and 23 days to prepare his soldiers and the squad that should bring them to the coast of Ibiza. In theory, the summer was supposed to be the best time of the year for navigations, which is why this date was chosen.
On April 12th 1235, Guillem of Montgrí signed a contract with Pere, Infant of Portugal and Nunó Sanç, the Count of Rosselló. They then gathered their forces in order to carry out the conquest.

Thus on the date indicated in the King’s donation, the conquest of Ibiza and Formentera was happily brought to a termination. On August 8th 1235, the date of the festivities of Saint Ciriac, the town and the castle of Ibiza were conquered by the troops of Montgrí, Sanç and Pere of Portugal. Only shortly after, the remaining lands of the Pityuses were occupied as well. 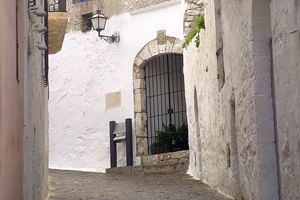 The legend of betrayal

On Saint Ciriac in 1235, the Catalan troops defeated the Saracen resistance and intruded into the fortified precincts of Ibiza. The legend most popular amongst the Ibizian people and that is still well known today, is the one of the fall of the town. Apparently the conquest happened very smoothly, as it was facilitated by the Moorish sheik’s brother who wanted to take revenge upon his sibling for stealing his wife. According to the feature writers, “he took advantage of one of the windows of his house that was situated outside the city-walls in order to let besiegers enter.” On the path that leads to the cathedral, a little chapel reminds of this legend of betrayal. The chapel is called Saint Ciriac and every year in the scope of the commemorative programme of the festivities, one of the acts consists of the island’s authorities visiting this place. Afterwards, the institutional act takes place on the Plaza del Ayuntamiento, where the falling statue of Guillem of Montgrí is located.

This mixture of tradition and legend has been bequeathed less than five centuries ago hence 15th century documents give evidence of denominations such as ´the field of betrayal´ and ´the door of betrayal´. We do not know the protagonists´ names, neither the betrayer’s, nor the betrayed or the wife’s names… but why would we want to find out? In the end, the most beautiful legends are always the ones in which a love affair lead to a splendid conquest.